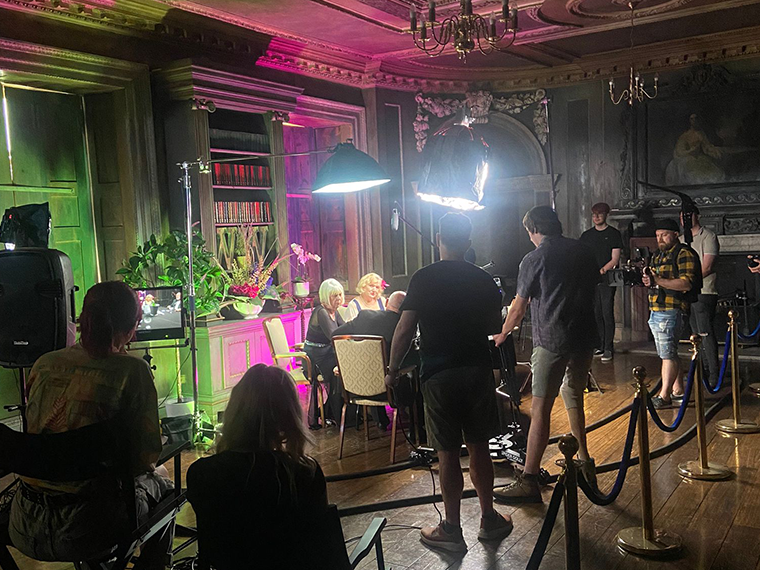 A number of University Centre Rotherham students helped to creatively produce the ‘House of Future Creatives’ event at Wentworth Woodhouse, alongside Rotherham College students, as part of the 2025 Rotherham Children’s Capital of Culture celebrations.

In 2025, Rotherham will become the world’s first Children’s Capital of Culture, hosting a 365 extraordinary festival packed with music, creativity, drama, exhibitions and more.

This will all be created by young people, gaining life-changing skills and knowledge as they plan and deliver large-scale events.

Students were part of the technical team at Wentworth Woodhouse, where they have been enrolled in a 6-month programme to prepare for the event alongside their studies.

Students have met with industry professionals, seen set constructions and even observed the filming of Netflix’s ‘The Crown’.

There were a host of activities to get involved with at the event, including a live film set, a digital art zone, and the screening of ‘’Four of a Kind’’, an immersive film created by University Centre Rotherham students.

It was a great opportunity to mix with other creative individuals, with students even featuring on Look North BBC News. Steve Ash was also interviewed at the event and oversaw all of the activities. He stated that giving young people the chance to get creative is fantastic.

He said: ‘’This is a unique opportunity for students to be engaged with several different creative mediums, including the opportunity to work on various large-scale television series.

‘’We have bookings all the way up to 2023 for major films, meaning future students on the programme will gain the same exciting experiences.

‘’We are keen to give something back to Rotherham and address those skills gaps, and it is amazing to have University Centre Rotherham on board.’’

Draven McQuinn, Level 5 Media, Moving Image and Photography student, helped to direct the live film set at the event and said it was a fantastic evening.

She said: ‘’I have always had a passion for film, however, I really enjoyed watching the director’s cuts which inspired me to want to make films.

‘’Coming to University Centre Rotherham has helped me to get the experience I need, as working at a large event prepares me for the industry.

Learn more about our creative courses