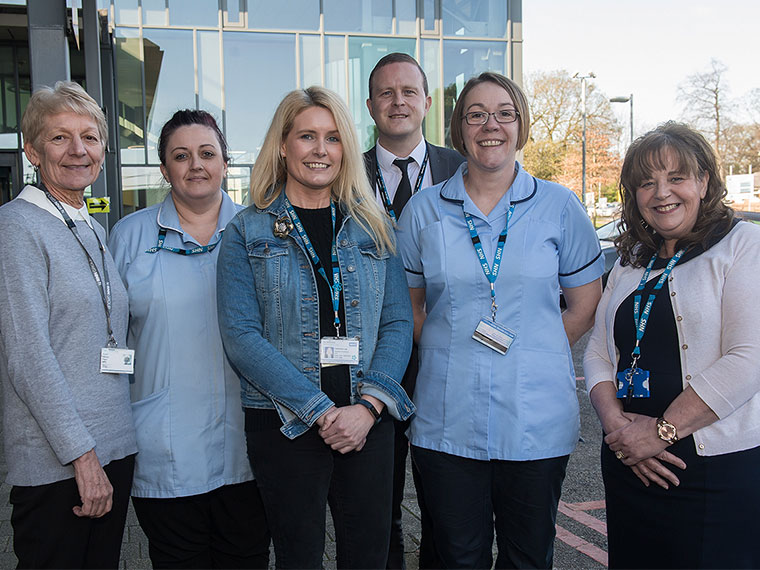 The first cohort of Level 5 Healthcare Assistant Practitioner apprentices from Rotherham NHS Trust are celebrating after passing their end-point assessments and achieving a Foundation Degree in Professional Practice in Health and Social Care.

The four experienced healthcare professionals were the first to study the new higher apprenticeship with RNN Training to upskill themselves and are set to reap the benefits of having achieved nationally recognised qualifications after combining their demanding full-time roles with a challenging Level 5 apprenticeship.

Dawn White is an Assistant Practitioner in the Community Occupational Therapy Team for the Trust.

Dawn said: “It’s been such a great experience for me. Although I was doing the job of an Assistant Practitioner I didn’t have the qualification. This course was about my personal development. I feel as though I’m equal now to everybody in the team – that’s what this apprenticeship has done for me.”

Louise Connell is a Clinical Support Worker for the District Nursing Team and was put forward for the Level 5 Assistant Healthcare Practitioner apprenticeship by her manager.

Louise said: “There have been ups and downs. I did the apprenticeship with a view to progressing in my career and there may be an opportunity coming up as a Community Matron. I’ve also got a place at University in September if I want it so we’re trying to get some funding for it.”

Cath Jay works alongside Dawn in the Community Occupational Therapy Team and has been working in the NHS for 25 years.

Cath said: “I’ve previously completed an NVQ in 2016 and I decided I wanted to do a bit more. When my manager said that this apprenticeship was available I thought ‘Brilliant; I’ll do that!’ While I have a lot of experience I didn’t have any academic qualifications to back up my role. I didn’t have anything on paper that said I could do my role.

“Another thing was that there was talk that if there was ever an occupational therapy degree apprenticeship, doing this course would benefit me in getting on to that.”

Joanne Eyre is also a Clinical Support Worker with the District Nursing Team and has worked within the NHS for 18 years.

Joanne added: “Before this all my qualifications were in-house, so I had nothing formal on paper – so it was a good opportunity. It’s tough balancing a full-time job and all the demands that come with that as well as being at home and having to maybe sacrifice sitting down with the family to have tea because I just needed that hour to get some work finished.”

He said: “The main thing for the Trust is to upskill and invest in our own employees. It’s great for individuals and can open up further progression opportunities. The training, skills and knowledge received can contribute to gaining a higher-level role within the Trust. It makes a huge impact on retaining quality staff.”

Wendy said: “The ladies in this room show the versatility of apprenticeships and are testament to the difference they can make not only to the individual but to businesses. There is a misconception that apprentices are people at the start of their career but these four ladies are hugely experienced professionals and the Trust have seen the value in using apprenticeships to upskill their existing workforce.”

Find out more about higher and degree apprenticeships.