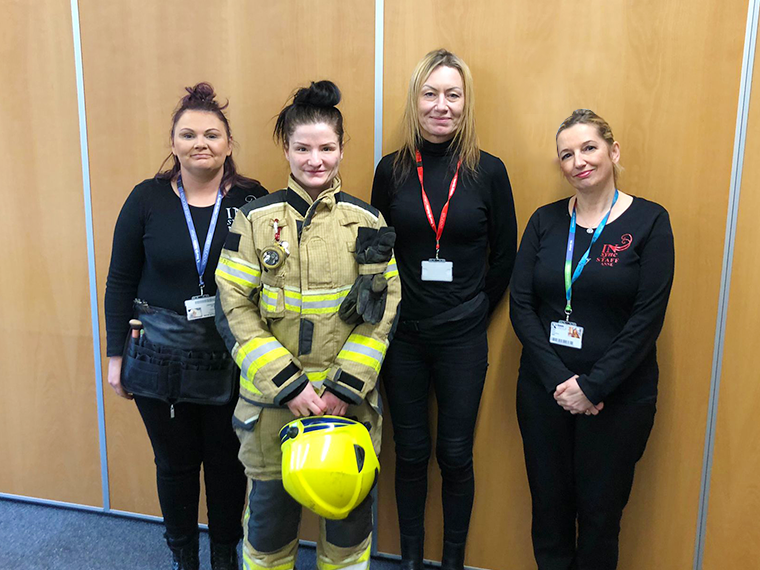 Today, Tuesday the 8th of March, marks the 111th International Women’s Day. The annual day celebrates the social, economic, political and cultural achievements of women and is recognised all over the globe as a landmark day in the calendar.

The theme for International Women’s Day 2022 is #BreakTheBias, which looks to challenge the conscious and unconscious biases, stereotypes and discrimination which people, particularly women, face in everyday life.

Students at North Notts College are once again getting behind the initiative and celebrating International Women’s Day. Level 5 Media Make-up students from the Retford Post-16 Centre have been working with the South Yorkshire Fire and Rescue Services on their ‘Women of Fire’ campaign.

The campaign looks to celebrate the achievement of women in the Fire and Rescue Service, as well as to inspire other women to join the service. Through a series of photographs of female Fire Officers, styled by the students, in both their uniform and in their everyday clothing, the Fire Service wants to convey that anyone can be a firefighter.

Level 5 Media Make-up student, Katie Hardman, was one of the students who worked on the campaign. Katie and her course-mates were asked to do the hair and make-up of the Fire Officers involved, where each Fire Officer could ask to be styled to their own preference.

Speaking about the experience, Katie was full of excitement for the campaign.

She said: “It’s lovely to come in and be able to work with the Fire Officers and provide a bit of ‘glam’ – something that most of them aren’t used to.

“It’s such a brilliant campaign to be a part of.”

One of the Fire Officers involved in the campaign was Area Manager and operational Firefighter Cath Toovey. Having worked with the South Yorkshire Fire and Rescue Service for 23 years, Cath is one of the more experienced members of the team.

She said: “I think it’s brilliant to raise awareness for female Firefighters. Girls and young women need to see other women in jobs that they wouldn’t have historically been thought to do.

“It’s important for young women to see other women doing the job, because then they know that it’s achievable for them too.

“Joining the Fire Service was the best thing that I’ve ever done.”

Speaking about the students’ work for the campaign, Cath was full of praise.

She said: “I’m really stepping out of my comfort zone with putting make-up on and getting all glammed up, but the students have been excellent today and it is quite nice being pampered – at least when it’s for a good cause.”

Level 5 Media Make-up student Oliver Helm was another student working as a stylist on the International Women’s Day Campaign. Speaking about the experience, Oliver underlined how important it is to combat gender stereotypes and how brilliant it was to work with the Fire Officers.

He said: “It’s always amazing to put the skills and knowledge we learn during our studies to the test, but particularly so, on a set with real photographers and people and when it’s for such a great cause, such as this.

“The fact that our work will be shown as part of a big campaign and in a gallery in Sheffield is also a fantastic opportunity for us all. It’s been a really great experience.”

Photographs of the female Fire Officers who took part in the campaign, styled by the students, will be on display as part of a photo exhibition in the Winter Gardens in Sheffield City Centre from Monday 7th March, until Monday 14th of March.

The exhibition will be on display in the Winter Gardens in Sheffield City Centre from Monday 7th March, until Monday 14th of March. The campaign can also be viewed on the Women of Fire website.